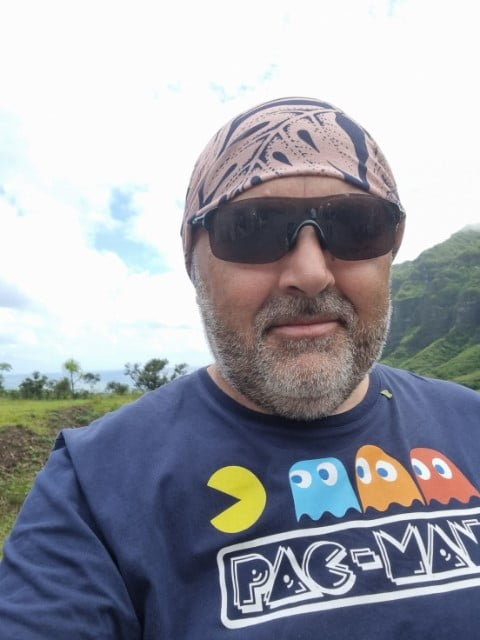 My name is Paul. I was born with EB Simplex.

My father and grandfather both had EB. I have three siblings and I was the only one of us four kids to get it. I have one son and I’m glad he was born without EB.

I’ve lived for 55 years with my EB. The doctors just told me I would have to live with it as there were no treatments that could help me.

Until I heard Jonathan Brown (EBRPA Ambassador) on the radio talking about EB I didn’t know there were any groups out there looking after people with EB. I’m grateful that after all this time there is an organisation like the EB Research Partnership Australia working to find a cure.

EB has changed my life in so many ways. It was hard for my parents. You go through a lot of ups and downs with EB, it’s so hard. I had permission from my local primary school to ride my bike to school and leave it in the shed because I couldn’t walk long distances. The other children noticed and asked why I was allowed to ride a bike and they couldn’t. My mother said I wasn’t allowed to wear runners as the synthetic fibres caused my feet to sweat so I wore desert boots to school. I’ve never worn thongs (footwear) in my life.

I couldn’t do a physical job. My friend gave me a job working with him making car tyres but by the end of a day my hands were completely cut up with blisters, I stuck it out three months in the job because I really wanted to make it work.

I gradually learned to push myself and challenge my limitations. In high school I hid my EB and joined the basketball team without telling my parents. I didn’t tell the coach I had EB for three years, I got told off for that! I saved up money from my paper round and bought myself my first pair of sports shoes. It hurt a lot but it was worth it. I played basketball for over 15 years and have coached two junior teams.

I was always told what I can’t do. I had to learn what I can do and adapt.

I’m grateful to only have the Simplex form of EB. There are a lot of people out there way worse off than me. I was brought up to give back, I want to help kids living with EB and share my story with them and let them know there is hope, and we can do a lot more .